We all know that ‘run-down-feeling’: your head throbs, your throat itches, and your body aches. You’re getting sick. And sickness can throw your routine into disarray, especially if bouts of it strike often enough. It means missed work, skipped social commitments and a backlog of chores. So how can you prime your body for whatever Mother Nature throws at you? It comes down to strengthening your immunity. We’ve cherry-picked our favourite immune-boosting foods to supercharge your body’s defences. If you look after yourself, your immune system with look after itself: simple.

Turning to citrus fruits when you’re under the weather is the oldest trick in the book. Why? Because this age-old antidote works! You see, tangerines, lemons, limes, oranges, and grapefruit are chock-full of vitamin C – a potent antioxidant that supports immunity by creating a barrier against invading pathogens and free radicalsi. Did you know your body struggles to store vitamin C, too? All the more reason to up your daily intake of citrus foods to keep sickness at bay. Oh, and as for that slice of lemon in your tea – we couldn’t encourage it more. According to a study published in Nutrition Research and Practice, both tea and lemons are rich in another toxin-fighting compound called quercetinii.

Besides adding a little zing to your meals, garlic works wonders for immunity. For centuries, garlic has been heralded the elixir of health, thanks to its antioxidant and free-radical-fighting credentials. Garlic can be chewed, crushed or sliced to produce the ‘allicin’ – the active compound that gives garlic its immune-nourishing reputation.  In clinical trials, this humble bulb has shown immense promise in preventing the common cold or flu and reducing the severity of illness when it does strikeiii.  Top tip: if you want to reap garlic’s infection-busting properties, eat it raw because heat deactivates the allicin (a good reason to put up with garlic breath, right?).

Your parents were onto something when they told you to eat up your broccoli. Jam-packed with vitamin A, C, E, protein and fibre, this leafy green is one of the best things you can eat to strengthen your immunityiv. However, before you start chopping and throwing it in a pan, here’s some food for thought: a study conducted by the University of Warwick discovered boiling broccoli can undermine its immune-boosting propertiesv. Eating this verdant veggie raw is the best way to soak up all its nourishing goodness.

If you think citrus fruits are the best source of vitamin C in town, think again. Gram for gram, red peppers contain twice as much of this vitamin than citrus counterparts. This means our oh-so-crunchy friends are brimming with free radical-quashing antioxidants, making them a stellar weapon in your arsenal for combating infections and strengthening immune responses. Slice into wedges and dip into hummus, mmmmm!

This ‘spice of life’ offers a double whammy of protection against illness. Firstly, ginger boasts antioxidant, anti-inflammatory and antimicrobial qualities, which support immune responses and help combat illnessvi. And if that wasn’t enough to convince of its health credentials, ginger is thought to soothe nausea, too. Though experts are still trying to understand the science behind it, they surmise ginger contains certain chemicals that influence the stomach, nervous system and intestines to reduce sicknessvii. Try whipping up a magical mixture of fresh ginger, turmeric, lemon juice, pinch of black pepper, and 1 tbsp. raw honey for a delicious immune supporting drink.

Spinach didn’t just make the cut because of its impressive vitamin C content (although its powerful antioxidant punch is certainly worthy of praise), it’s also abundant in beta-carotene, vitamin A, and zinc, all of which have the capacity to fight infection. In fact, a study published by Nature found that eating plenty of vitamin A during pregnancy was vitally important for bolstering a baby’s immune responses for lifeviii. Like broccoli, spinach is best consumed raw to maintain its nutritional value. Thankfully, it’s the perfect canvas for a salad. Pass the greens, please.

Thanks to its impressive antioxidant, antimicrobial, and antioxidant properties, turmeric is a mighty powerhouse for immunityix. It’s worth noting, however, the active compound in turmeric, curcumin, isn’t readily absorbed into the bloodstream. The secret to optimal absorption? Eating turmeric with some of its best buddies: fat-containing foods; oily fish, milk, avocados etc. If you’re coming down with a sniffle, try homemade golden milk. Bring 1-½ cups of milk, coconut milk, or another nut-based milk (oat milk works a treat) to the boil and add one teaspoon of turmeric. Remove from the heat and add ¼ tsp. of ground ginger.  Et voila – a delicious, nourishing beverage to supercharge your immune defences.

Like its green, cruciferous cousin, broccoli, chowing down on cauliflower is another quick win for immunity. What makes this tasty veggie such a superstar for your immune system is the fact it’s teeming with the antioxidant, glutathione, which acts like your biological police force, tracking down and removing anything that doesn’t belong in your bodyx. (Influenza virus – we’re looking at you.) Combine cauliflower florets with cumin, cinnamon, cayenne, salt, pepper and olive oil, and roast for 30 minutes. Just before serving, sprinkle with fresh lemon juice for another zesty, immune-supporting hit.

That bunged-up-nose and throbbing head calls for one thing: heat! Hot cayenne peppers are chock-full of capsaicin (the compound that gives them that fiery kick), which has been linked to providing some much-needed sinus reliefxi.  To say sayonara to the first sign of sniffles, fire up your traditional guacamole, roasted veggies and curries with a cayenne pepper or two – depending, of course, on how brave you’re feeling…

It isn’t a coincidence cold and flu season strikes in the bitter, dark days of winter. A raft of scientific research suggests adults with low levels of vitamin D are more likely to come down with a cold, cough or upper respiratory infectionxii. And since that vitamin D hit from the sun is hard to come by in the winter months, you need to get your dose from food. This is where our fishy friend, salmon, comes in. Salmon is brimming with the sunshine nutrient – not to mention a slew of other immune-supporting compounds: omega-3’s, protein, calcium and vitamin E. Aim to eat salmon two to three times a week during flu season.

Let’s be honest, no immunity food list would be complete without a good old bowl of chicken soup. And there’s actually a ton of research to back up Granny’s go-to. German scholars found this warming meal contains a compound called carsonine, which is thought to ease respiratory symptoms, combat infection and enhance your overall immune responsesxiii. Plus, it’s exceptionally hydrating – another crucial component to help you recover from illness quickly. 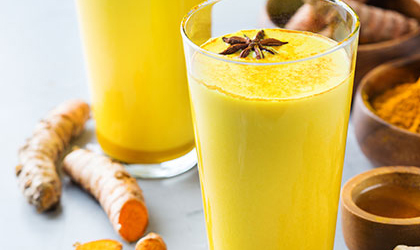 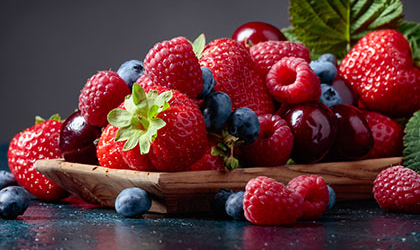 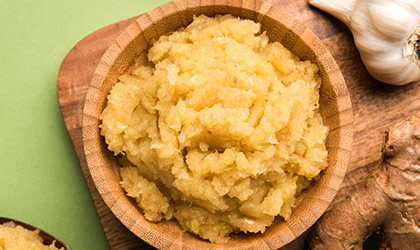