Lactose intolerance is often mistakenly thought of as an allergy to milk. But in fact it’s caused by a lack of a digestive enzyme that digests lactose, a disaccharide sugar found exclusively in milk (including milk products).

This enzyme is called lactase, and it’s needed to break down lactose into two other sugars called glucose and galactose, both of which are easily absorbed into the bloodstream. Lactase is produced in the tips of the villi, tiny finger-like structures lining the inside of the small intestine that are responsible for absorbing nutrients and producing digestive enzymes.

Most babies naturally have the ability to produce lactase so they can digest milk (human breast milk also contains lactose). But when children reach the age of two years old, their production of lactase tends to decrease.

In fact, it’s thought that 75 percent of the world’s population is deficient in lactase, and that the ability to digest lactose is gradually lost to some degree or other in most populations – though those from communities where dairy foods are frequently eaten are thought to be less affected.

For example, up to 17 percent of people from Northern Europe are affected by lactase deficiency, whereas in African, Asian and Hispanic communities (where traditionally fewer dairy foods are eaten), the proportion of people who are lactase-deficient may be as high as 90 percent (ii).

This explains why here in the UK, lactose intolerance is more common in those who originate from Asia, Africa or the Caribbean. Meanwhile, lactose intolerance can develop at any age, thought most cases tend to be diagnosed in people between the ages of 20 and 40 (iii).

Lactase deficiency is very common in adults worldwide, but not everyone who has it goes on to develop the symptoms of lactose intolerance. These symptoms tend to develop within a few hours of eating or drinking something that contains lactose.

If you produce enough lactase, the glucose and galactose are absorbed into your bloodstream. But if you don’t, the unabsorbed lactose moves through your gut and into your colon, where it’s broken down (fermented) by bacteria. The fermentation produces fatty acids and gases such as carbon dioxide, methane and hydrogen, which leads to typical lactose intolerance symptoms such as:

The severity of symptoms varies widely between one person with lactose intolerance and another. Some can eat certain amounts of lactose without developing any symptoms, while others may not be able to tolerate even the smallest amount of milk. Most people with lactose intolerance also find their symptoms vary according to how much lactose they’ve eaten – in other words, the more they eat, the more likely they’ll have symptoms (and the worse those symptoms may be).

If you think you may have lactose intolerance it’s a good idea to see your GP, since the symptoms are similar to those of other conditions such as irritable bowel syndrome and milk protein intolerance (this isn’t the same as milk allergy but is a reaction to the protein in cow’s milk).

Lactose intolerance is the result of not producing sufficient amounts of the enzyme lactase. There are several different types of lactase deficiency, including the following:

Also known as adult-type hypolactasia, lactase nonpersistence and hereditary lactase deficiency, this is the most common cause of lactose intolerance worldwide (iv). Primary lactase deficiency runs in families, and is the result of an inherited genetic fault. This type of lactase deficiency can develop at any age, though experts believe it usually starts after the age of two, by which time many young children are weaned off milk (either breast milk or formula milk). The symptoms of lactose intolerance, however, often develop many years later, usually during adulthood.

Secondary lactase deficiency is common in children and often develops after a stomach infection such as gastroenteritis. In such cases, lactase deficiency can be temporary, and the production of lactase may start again when the person affected has fully recovered from their infection.

Other long-term digestive conditions, however, may cause lactase deficiency on a permanent basis. These include:

Like primary lactase deficiency, this is caused by an inherited genetic problem. This only affects newborn babies, who produce very little or no lactase. The condition is rare, however, and both parents must have the faulty gene to pass it on.

Babies who have congenital lactase deficiency develop symptoms as soon as they start feeding. In such cases, babies are fed a special lactose-free milk.

A reasonable amount of time is needed for lactase to build up in a baby’s digestive system. Those born more than six weeks premature may be affected by temporary lactose intolerance symptoms, since they have very low levels of lactase owing to the fact that their small intestine may not have been fully developed before they were born. This condition is called developmental lactase deficiency, but the good news is it usually improves as an affected baby gets older.

How is lactose intolerance treated?

There’s no cure for lactose intolerance. But if your GP thinks you may have it, you’ll probably be advised to stop eating and drinking anything containing lactose for a couple of weeks to see if your symptoms improve. If they do, you may have to make changes to your diet in the long term.

These changes don’t necessarily involve never eating lactose foods again. It will depend on how sensitive you are to lactose, and you may well be able to tolerate a certain amount in your diet before your symptoms are triggered. Other people, however, may not be able to eat or drink the smallest amount of lactose without having symptoms. But according to the NHS, most people with lactose intolerance can still have small amounts of lactose without experiencing any problems.

The main foods that may trigger your symptoms include the following:

Whether it comes from a cow, goat or sheep – and even if it’s flavoured – milk is a major source of lactose. There’s slightly less lactose in whole milk compared to skimmed, but the milks with the highest amounts lactose are evaporated and condensed milk (up to 16 percent lactose, compared with whole or skimmed milk, which contains between 4 - 5 percent lactose) (v). br />
Some people with lactose intolerance find they can have small amounts of milk in tea or coffee, but their symptoms may flare-up if they have a glass of milk or milk on their cereal.

Dairy products made from milk such as butter, cheese, yoghurt and ice cream also contain lactose. But the amount of lactose they contain varies, which means some people with lactose intolerance may still be able to eat some of them in moderation. For instance, some hard cheeses – such as Stilton, Edam and Double Gloucester – contain much lower levels of lactose than other types such as cream cheese or cottage cheese.

Some people with lactose intolerance can eat dairy products with a higher fat content without causing any problems too – experts believe this may have something to do with the fact that fat slows down the rate at which foods leave the stomach. Live yoghurt is also thought to be better tolerated non-live varieties, since the bacteria in live yoghurt may partially break down lactose.

Meanwhile, look out for other foods that may contain lactose (check the ingredients list carefully for any mention of lactose, milk, whey, curds, cheese, butter, milk by-products, dry milk solids, non-fat dry milk powder and cream). Some of these foods may surprise you, including the following:

Certain medicines contain very small amounts of lactose, whether prescription medicines, over-the-counter medicines or complementary medicines. However, this will not usually cause a problem unless someone has severe lactose intolerance or they’re taking several types of lactose-containing medicines.

How to help yourself

If you have lactose intolerance, it doesn’t have to mean sticking to a restrictive diet, as there are lots of other foods and drinks you can have that serve as alternatives to milk and dairy products.

Look out for foods that are labelled as dairy free or suitable for vegans (vegans don’t eat or drink milk or dairy foods), including soya milk and yoghurt, and milk made from rice, oats, almonds, hazelnuts and coconut.

Those who want to continue drinking cow’s milk can find varieties that contain additional lactase or lactose-free/lactose-reduced milk at their local supermarket. Another possible way to keep drinking milk without having any or many symptoms is to have a glass – or some dairy foods – with a main meal. It’s thought that this reduces lactose intolerance symptoms because it slows down the digestive process and affects how the lactose is absorbed in your small intestine.

Calcium and other nutrients

If you decide to use milk alternatives, try to choose ones that have added nutrients or you may end up not getting enough calcium in your diet. Milk also contains protein and vitamins including vitamin A, B12 and D, while lactose helps your body absorb several other minerals including magnesium and zinc (all of these are important for bone health).

Indeed, if you’re lactose intolerant, you may have a higher-than-normal risk of developing one or more of the following health conditions:

Calcium is also necessary for other things such as regulating muscle contractions.

However, there are other dietary sources of calcium, including green leafy vegetables, soya beans, nuts, fish with edible bones (salmon, sardines etc) and fortified products.

You can also get vitamin D from eggs, liver and – if you can tolerate it – yoghurt, as well as from the sun (your body makes vitamin D when your skin is exposed to sunlight). Many people in the UK, however, are believed to be deficient in vitamin D. To boost your intake of zinc, meanwhile, try eating foods such as oysters, chicken, crab, beef, pork, cashew nuts and chickpeas.

It’s also worth considering taking nutritional supplements to offset any deficiencies in your diet that could be the result of avoiding milk and dairy foods. Look for a good-quality multivitamin and mineral supplement that contains decent levels of calcium, vitamin D and zinc.

Alternatively you may want to consider separate vitamin D and zinc supplements. The recommended form of vitamin D is vitamin D3 or cholecalciferol, as it’s the natural form of vitamin D that the body makes when it’s exposed to sunlight. Vitamin D3 supplements are available in tablet form, and now you can get them in veggie-friendly drops too.

Besides making changes to your diet, if you’re lactose intolerant you could also try taking supplements that contain lactase substitutes. Available in tablets, capsules and also as drops, these help replace the lactase your body isn’t producing. And by helping to break down any lactose you’ve eaten, lactase substitute supplements may help reduce your lactose intolerance symptoms.

According to the NHS you should take lactase substitutes with your meals or drinks to improve your digestion of lactose (iii)..

Managing lactose intolerance on a daily basis can become difficult, however these steps should help to ease some of the symptoms. For even more advice on a range of common health concerns, why not visit our health library?

Lactose Content In Dairy Products
All About Lactase and Dairy Intolerance 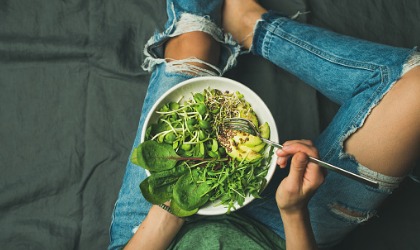