Whether you paint yours or leave them to remain natural, nails whether on your fingers or your toes serve an important purpose. First, they protect the tips of your fingers and toes. And at least where fingernails are concerned, they may also improve your fingertips’ sense of touch.

There are several components that make up your nails, namely the root, the nail bed, the nail plate, the eponychium, perionychium and hyponychium.

The nail root is under the skin behind the fingernail and extends several millimetres into the nail bed (the edge of the root is the visible white crescent shape often called a half moon the medical term for this structure is the lunula).

This extends from the lunula to the hyponychium (the edge of the nail where it’s still attached to the skin of the fingertip – see below). The nail bed contains blood vessels, nerves and melanin-producing cells called melanocytes.

This is the actual nail itself, which is made of a substance called keratin. The pink colour under the nails is produced by the nail bed’s blood vessels.

If you’ve ever had a hangnail or an ingrown nail, it arises from the perioncyhium (this is the skin on the sides of the nail plate).

This is where the far edge of the nail plate and the skin of the fingertip meet.

Nail facts: did you know?

Fingernails grow faster than toenails (they grow at an average rate of 3mm per month compared to the average growth of toenails at 1mm per month) (i). It takes about six months for a fingernail to grow from the root to the free edge (the part of the nail that extends from the edge of the nail bed). But toenails take a year or more to fully regenerate. However, as you get older, your nails grow more slowly and can become more brittle.

There are many different types of problems that may affect your nails. Here’s a quick guide to the most common ones and what they say about your health:

Often these can be a sign of a fungal nail infection, though they can also be caused by psoriasis, a form of arthritis called reactive arthritis, and wearing badly fitting shoes for a long period of time.

These can also be a sign of a fungal nail infection, but often they are a result of exposure to water, detergents and other chemicals such as those found in nail polish. Other conditions that cause brittle, crumbly nails include an underactive or overactive thyroid, nail psoriasis and a skin condition called lichen planus.

Nails can turn grey, brown or green-black, but possibly the most common discolouration of nails is yellowing. Again, fungal nail infections and nail psoriasis can be behind this common nail problem. Other things that could cause yellow-coloured nails include sinusitis, jaundice (which turns the skin under the nail plate yellow), tuberculosis, lymphoedema (which causes swelling of the skin) and infection of the nail folds (or perionychium).

Using nail polish for extended periods of time can also discolour your natural nails. Nails that are half white and half brown, on the other hand, may be a sign that your kidneys aren’t working properly.

Pitting or small dents on the surface of the nails can be a sign of psoriasis (according to the NHS, up to 50 per cent of people with psoriasis have pitted nails (ii)). This can also be caused by eczema, reactive arthritis and a type of hair loss called alopecia areata.

Vertical ridges on your nails often become more prominent as you get older but are rarely anything to worry about. Sometimes, however, they can be a sign that you are lacking in iron, folic acid or protein. But if you have grooves that run horizontally across your nails, the effect is called Beau’s lines, and it may be caused by a previous illness or injury, chemotherapy or if you have Raynaud’s disease by previous exposure to very cold temperatures (the ridges will appear several months after exposure).

Injuries to nails can lead to them becoming loose and eventually falling off. But if you haven’t sustained an injury it’s possible that a loose nail could be caused by a fungal nail infection, nail psoriasis, poor circulation, an overactive thyroid or a serious condition called amyloidosis, which is the result of proteins building up in tissues and organs in your body.

If you have white lines that run in parallel across your nails, it may be a sign that you have low protein levels, possibly because you have liver disease. White spots or specks under the nails are less of a worry, with some experts believing they may be a sign of zinc deficiency (iii).

For more information on some other common foot problems, see our in-depth guide.

A fungal nail infection is one of the most common things that affects the appearance of the nails, causing discolouration, thickening, brittleness and crumbling. It can affect your fingernails or your toenails, and if left untreated it can lead to pain and discomfort (though for most people, the changed appearance of the nail is the main issue). The infection can also spread to your other nails if you don’t take steps to deal with it.

Fungal infections of the toenails is often caused by the athlete’s foot, a fungal skin infection that can easily spread from between the toes to the nails. Certain health problems may also make you more susceptible to developing a fungal nail infection, including diabetes and psoriasis.

Keeping your nails clean and cool ? especially your toenails ? can help to treat and prevent fungal nail infections. However, if you have a more severe infection you may need to take antifungal medicines, which are available as prescription tablets, or over-the-counter liquids that you paint on the affected nail.

The advantage of antifungal tablets is that they tend to work more quickly than nail paints. However, they can cause unpleasant side effects, including headache, nausea and diarrhoea. Antifungal nail paints, on the other hand, may have to be applied for up to a year (in the case of a toenail). There are also products you can buy that soften and remove the fungus along with the affected part of the nail plate.

If these antifungal medicines aren’t effective, your GP may recommend that you have surgery to remove the infected nail. A new nail usually grows in its place though it could take a year or more. Laser treatment may also be used to treat fungal nail infections effectively (though this can work out expensive).

How to keep your nails healthy

Living a healthy lifestyle may help keep your nails strong and attractive. Here are some of the things you should do to keep your fingers – and toes – in great shape:

Nail problems are surprisingly common, with about 20 per cent of people thought to be affected by brittle nails alone (iv). Thankfully there are a few nutritional supplements that may help, including the following:

This B vitamin if widely recommended as a supplement for those with weak, brittle nails, with one study suggesting it may help increase the thickness of nails and make them less likely to split (v). Other studies also report improvements in nail health after taking biotin supplements (iv). Nutrition experts also advise combining  B vitamins with vitamins C and E, as they are believed to work together to build keratin in the body as well as other proteins.

White spots under the nails may be a sign of a mild zinc deficiency (vi). The good news is this can be easily rectified by taking a good-quality zinc supplement, or better still a high-strength multivitamin and mineral containing zinc, which may also boost your health in general. However, bear in mind that it may take several weeks before you may notice any difference in the appearance of your nails.

Iron is essential for maintaining healthy skin, hair and nails. This may explain why many experts believe ridges on the nails or nails that are weak and brittle may signify your body needs more iron (viii). This too can be obtained from a good-quality high-strength multivitamin and mineral supplement.


Fish oils
Salmon, herring, trout and other oily fish contain healthy omega-3 fatty acids, and experts believe a lack of omega-3s could contribute to brittle and dry nails (ix). If you don’t like eating fish, you can get omega-3s from a good-quality fish oil supplement. Meanwhile if you’re a vegetarian or vegan you can still benefit from an omega-3 supplement, thanks to the availability of products that contain the natural triglyceride (TG) form of omega-3. This is sourced from plant organisms called microalgae rather than fish. 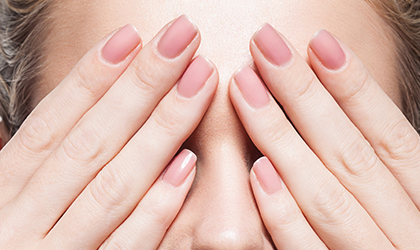 Common Nail Conditions: Is It a Sign of Vitamin Deficiency? 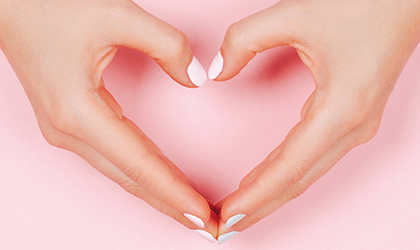 Vitamins and Supplements for Strong and Healthy Nails 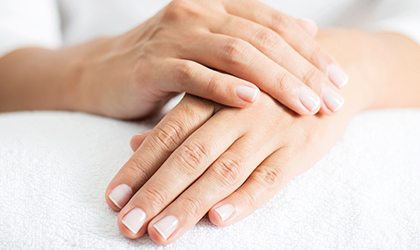